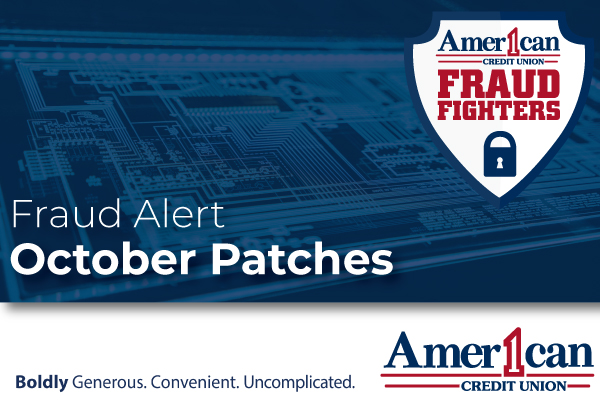 Every month there are patches made by major companies like Microsoft Windows, Apple, Adobe, Chrome, and Firefox. Patches and updates are modifications from the vendors to fix issues that are found in their software. It is important you update your computer with these patches because if you don’t, hackers can take advantage of the vulnerabilities and gain access to your computer or private information. This could result in the loss of your identity, personal security, or even money if you were to be hacked on an unpatched computer.

Cyber-attacks are evolving every day, increasing the threats of exposing private information that could damage your personal and financial identity. American 1 Credit Union is dedicated to help you by keeping you up to date on security vulnerabilities. By staying informed you can take necessary steps to keep your information safe and private.

Barnes and Noble disclosed they experienced a cyber-attack on October 10. Personal details were exposed as a result of the attack including email addresses, billing addresses, shipping addresses, and purchase history. Further ramifications of the attack are still being investigated.