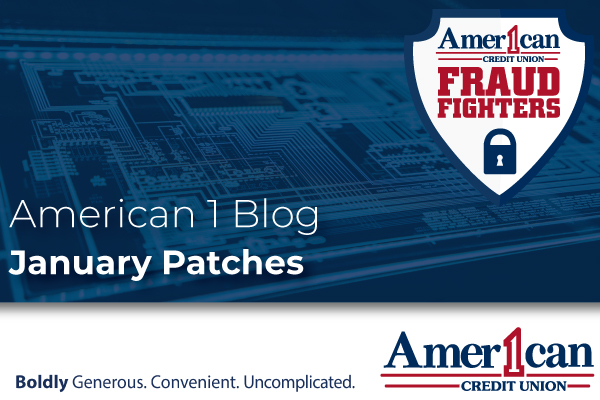 Each month, companies like Microsoft Windows, Apple, Adobe, and Chrome/Firefox introduce patches. Patches are modifications from vendors to fix issues found in their software. You must update your computer with these patches. If you don’t, hackers can take advantage of the vulnerabilities and access your computer or private information, resulting in losing your identity, personal security, or even money if hacked on an unpatched computer.

Cyber-attacks are evolving every day, increasing the threats of exposing private information that could damage your personal and financial identity. American 1 Credit Union is dedicated to protecting you by keeping you up to date on security updates. By staying informed, you can take the necessary steps to keep your information safe and private.

Windows released their security patches for January, which included 83 known bugs. Ten of these are labeled as critical, and 73 are labeled as important. To check if your system is up to date, open the Check for Updates application on your Windows computer.

Google is ringing in the New Year by officially saying goodbye to Adobe Flash Player, which reached end of life on January 12. Google Chrome version 88 was released on January 19 and has completely removed Flash from its platform. In addition to removing Flash, Google also removed support for FTP or File Transport Protocol, stating that since FTP is used by such a small fraction of their users. FTP is not a secure way to transfer data remove FTP support from the browser. With the new version of Chrome, we will also see improvement with Dark Mode, making it easier to sync dark mode settings from the operating system to Chrome tabs. Google Chrome added a new security control to prevent an attack called ‘tab-nabbing.’ This feature prevents links from opening new tabs and running potentially malicious JavaScript code on your computer.