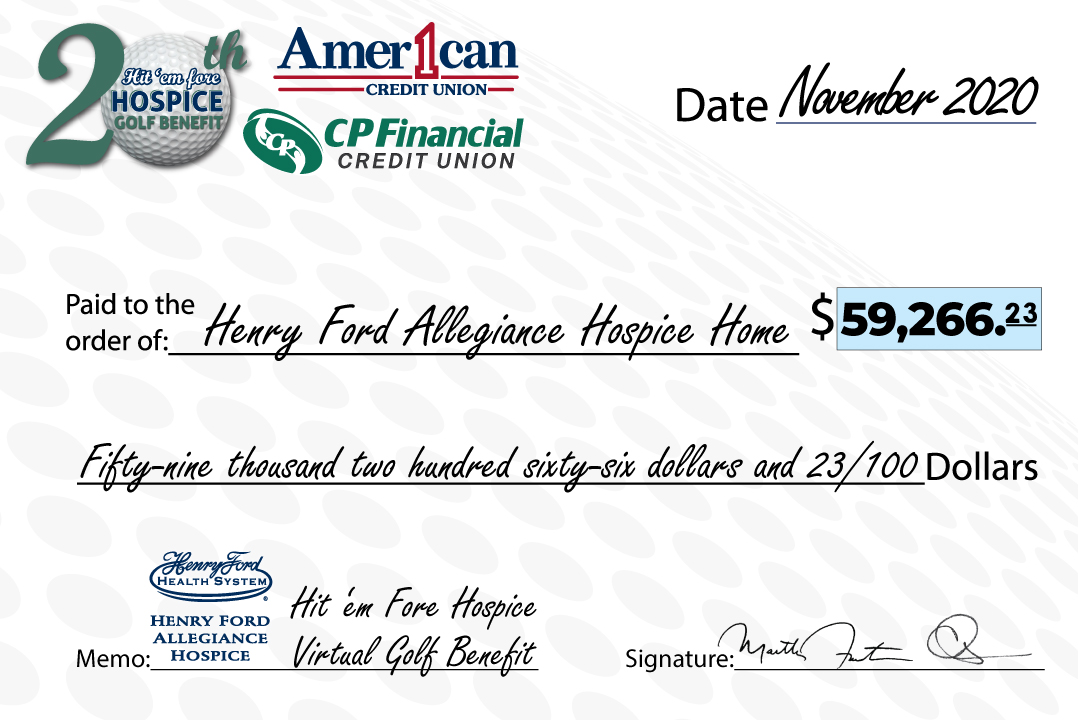 Over the course of the last three months, the two credit unions together surpassed their goal of raising $50,000 for the Henry Ford Allegiance Hospice Home totaling nearly $60,000. Although there was no golfing in a traditional sense this year due to the COVID-19 pandemic, the credit unions continued their fundraising momentum from 2019 by creating new ways to raise money during this unprecedented time.

An online “pop-up shop” with apparel and other unique items was available to the community as well as two 50/50 Raffles hosted at select American 1 and CP Financial branch locations. The 50/50 Raffles raised nearly $2,000 toward the event total. The event boasted 47 corporate sponsors and 53 individual donors and memorial tributes that helped generate the success of this year’s virtual event.  A full list of 2020 event sponsors can be viewed at hitemforehospice.org.

“Even amid the COVID-19 pandemic, our Henry Ford Allegiance Hospice Home team remained true to its commitment to provide compassionate end of life care for our patients. In addition to extending kindness to patients and families already receiving hospice care, the team continued to accept new patients at the same rate as prior to the onset of the pandemic,” said Paula Autry, Senior Vice President and CEO, Central Market of Henry Ford Health System and President and CEO of Henry Ford Allegiance Health.

The outing, which began in 2000, has now raised more than $371,000 for the Hospice Home over its 20 year history largly due to the efforts of CP Financial and their leadership of this event.

President/CEO of CP Financial Credit Union and Chair for the Henry Ford Allegiance Hospice Board Chrissy Siders stated, “I am blown away by the commitment and generosity of our employees, members and community during such challenging times. If there ever was a time to demonstrate hope and solidarity, now is that time. We consider ourselves blessed to come alongside American 1 Credit Union to raise funds for the Henry Ford Allegiance Hospice Home, but more importantly to share the responsibility of positively impacting the lives of so many in our community. Thank you just doesn’t seem to capture the immense gratitude we have for the donors, our teams and the Jackson community!”

In the second year of the unique partnership between CP Financial and American 1, the two credit unions focused on working together instead of as separate entities to give back to the community in which they were both founded.

“I am immensely proud of the dedication of the Hit ‘em Fore Hospice Golf Benefit committee. Not only were we able to achieve our goals, but we exceeded them – all during a time of economic uncertainty and unprecedented challenges due to COVID-19,” said Martha Fuerstenau, President/CEO of American 1 Credit Union and Vice Chair for the Henry Ford Allegiance Health Board of Trustees. “Many people rely on the Henry Ford Allegiance Hospice Home, because they’re the only organization in our community that provides this type of care for individuals and families, regardless of their ability to pay. It’s an honor to partner with CP Financial to support the Hospice Home.”

For more information or to stay up-to-date on next year’s event, follow along on Facebook at www.facebook.com/hitemforehospice.

Henry Ford Allegiance Hospice Home is the only residence for end-of-life care in Jackson County. The Hospice Home offers private patient rooms with sleeping space for loved ones, a water therapy spa room with walk-in tub, and features that encourage family gatherings, such as outdoor patios and walking paths, a gazebo and garden, children’s playground, and two lounge areas with kitchens.